During the last week in May, I woke up at 5am thinking that I was in the middle of a war zone (don’t worry Mom, this isn’t the case).  The walls shook when ten huge mortars were launched across the street to signify the start of the dances for each day of the four-day Señor Choquekillka festival.  This festival honors a patron saint of our town of Ollantaytambo, but in reality, it is a good excuse for everyone in Ollanta to dance, drink, and eat for 96+ hours.  I’m amazed at how each morning (after a hefty night of partying) people are up at 4am preparing food and that the horses living in the same pasture that the cannon resides have not been spooked all the way to Cusco.

I learned how the word “party” means something entirely different in South America a few summers ago when I lived in Ecuador.  It is the same here in Peru.  Here “party” means that there are dancers parading the streets in elaborate costumes, whiffs of grilled chicken and sugary churros, and of course cervezas galore!  This photo below was taken while sitting in the Sacred Valley Health office…like I said, there were random dance groups walking the streets…and sometimes even in rainbow pants.

But despite the constant action, the SVH team still managed to get a lot of work done.  I had the opportunity to revisit the small Andean town of Thastayoc on Sunday morning to present our community health worker program to the town president and a semi-large assembly of community members.  We took “la selva” (the jungle) bus up 1 1/2 hours worth of switchbacks to what is known as “high point” (~16,000ft).  This is an up close view of Veronica, a snowy mountain that is clearly visible from Ollanta. 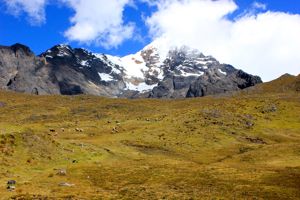 Upon finishing our presentation, my colleagues Sarah, Leticia (and her 2-year old David), and I hitch-hiked with some mountain bikers back to Ollanta…just in time for the bullfight.  Apart from the few drunk matadors, the fights weren’t overly exciting.  Although I probably shouldn’t criticize anyone who would be brave (or crazy) enough to get into an enclosed space with a 2-ton mass of fur and horns.

Since I will be here for at least another year, I made the executive decision that I should dance in the festival next year.  A few of the dance groups have caught my eye and upon speaking with my host dad (a big-wig in the community), I should be in.  And by next May, I will acclimated enough to handle four days straight of dancing.  My recommendation to anyone and everyone interested in visiting Ollantaytambo — come for Choquekillka 2013.  If the dancing and drinking isn’t attractive to you, then you should come for (possibly) the most exciting fireworks show you’ll ever see in your life. For the final night of the festival, nearly every resident Ollantaytino (and a good number of gringo tourists/volunteers) gathered in the plaza to watch the night sky become lit up by a solid (and haphazard) 25 minutes of fireworks.  And the display was FAR from mediocre.

I should have expected this, but Peru doesn’t have rules about how far a crowd needs to be from where the explosives are lit.  So it was pretty surprising when all of a sudden sparklers and huge mortar fireworks were shot less than 100 feet from where I was standing.  In addition, it was surprising to see how low the fireworks flew (and exploded) in the night sky.  The bright lights and loud noises were so close that they made me (and most of the gringos) jump back and on a few occasions, run for cover.  For some reason the whole ordeal was incredibly funny, and my friends and I laughed through the whole show.

Overall, despite all of the random crashes, bangs, and booms, and the similarity this festival bore to a YouTube video my ski coach told me about a few years ago, the festival was unlike anything I have ever experienced… and it definitely adds some boom to the average work week!